Warning: stristr() expects parameter 1 to be string, array given in /home/customer/www/educatesimplify.com/public_html/wp-content/plugins/custom-facebook-feed/inc/CFF_Utils.php on line 505
Please enter the Page ID of the Facebook feed you'd like to display. You can do this in either the Custom Facebook Feed plugin settings or in the shortcode itself. For example, [custom-facebook-feed id=YOUR_PAGE_ID_HERE].

Newly graduated nurses are having great difficulty finding jobs as registered nurses (RNs),as they compete with experienced nurses who are working more because of the economy.

With fewer nurses retiring or working part-time, positions typically available to new nurses have dried up and hospitals and health systems have cut back dramatically on new graduate hires. As a result, an alarming number of new nurses are unemployed or opting for non-nursing opportunities.

Unfortunately, this is occurring as the nursing workforce continues to age and California prepares for a looming nurse shortage. Ultimately, large numbers of nurses will retire. And, as the state’s population ages and grows, so does the demand for nursing care. At some point in the near future, California will again face a significant nursing shortage.

To quantify the extent of this hiring dilemma, in March of 2009 CINHC surveyed employers and found that approximately 40% of new graduates may not find jobs in California hospitals (the usual place of first employment for nurses) as only 65% of hospitals reported hiring new graduates, and these  hospitals were also significantly decreasing the number of new RNs they plan to hire from the number hired the previous year.

All hospitals hiring new graduates reported overwhelming numbers of applicants for few positions. The survey (and another conducted by the hospital association) indicated jobs were available but hospitals wanted experienced nurses.

Creativeresol-ve Educational Company – Los Angeles Training Center – commitment to education and patient safety has reach to another devotion. We would like to encourage New RN Graduates to jump start their career through the network that we have.

This group was born out of our seminars, IV Therapy, and CPR classes. When new grads meet   and exchange ideas, something magical happen… 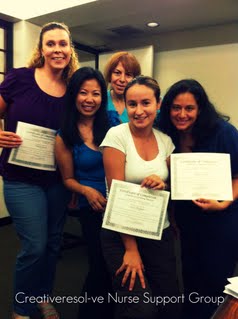 They get motivated, get leads and become inspired.

Why not join our Nurse Support Group and be inspired too.  Come to our training center at 3580 Wilshire Blvd Suite#1705C, Los Angeles, California. Join the group on the following schedules

We highly encourage you join our forum and ask questions >>>>> Forum
Also add us to your facebook for great discounts in our Classes >>>> Educate.Simplify.